As one of the leading manufacturers and suppliers of metal products in China,  one of our most popular products is the shipping containers. We offer shipping containers in different sizes and variations, among which is the Reefer Container, also known as the refrigerated container.

At SMC we ensure that your perishable goods are kept cool and fresh through the long journey of reaching the export market; or as they are being transported from the place of origin, that is the farm to the  market place in our temperature controlled cargo.  Our professional handling of perishable goods in these reefer containers is specifically beneficial to businesses that trade in the horticulture business farming products such as flowers, fruits, vegetables, sea food ,meat and other fresh produce.

Much like a cold room with controlled temperature, our reefer containers have a controlled atmosphere to ensure that the goods being transported remain as fresh as can be, thus quality products is not compromised. 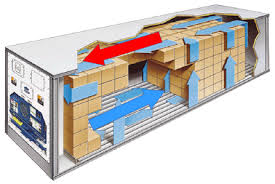 This intense temperature control is particularly useful in ensuring food quality; so it comes a long way as a great benefit for countries that aren’t self sufficient in food production and are dependent on imported fresh produce.

Refridgerated containers are also essential for transporting other sensitive goods such as plants,medicines and vaccines which need to be under certain temperatures all the time.

These containers are also handy in transporting  food products to military personnel living in bush camps and are out of reach of fresh produce.

Our reefer containers are equipped with low power consuming refridgeration technology, which is essential for energy saving.

Seasons Greetings! Look no further and contact us for a free inquiry about to get more information about the reefer containers. They are essential for transporting all those flowers and Christmas trees during this peak season!

Stay up-to-date with our latest updates by scanning the QR code below or follow us on these social media platforms:

Many philosophers, writers and narrators have for ages shared a common belief that hot temperatures increase violence and aggression. Even in the English language we use expressions such as “hot tempered” or “hot headed” to describe the character of an aggressive person. Scientists have also been interested in this connection for years, and through various studies, they have also found evidence for the correlation.

Many laboratory, field, correlational and archival studies give an unanimous result: hot temperature causes violent crimes. The emphasis is on the word violent, because contradictional  studies show that crimes also do occur in lower temperatures but they are most commonly non-violent. Also archival studies show that when the weather is hot e.g. a baseball player is more likely to hit the pitcher with a bat (source).

Still, the correlation between high temperature and violence is not flawless. For instance, what if everybody stayed at home on a hot day? Wouldn’t that prevent at least some occurrences of violence? Time is also a critical factor in this sense. Most of the violent crimes occur during the time when masses of people are most likely to engage in activities at the same time. In general, when a third variable changes the correlation between two variables so remarkably, we are talking about the Simpson paradox. In this case time changes the situation so that the relation between temperature and violence needs some modification.

Scientists have redefined the correlation and state that when the temperature rises above an uncomfortable level, the probability for aggression and violence rises as well. Therefore it is really important to ensure that especially public places such as schools,  shopping malls and even prisons have an enhanced air conditioning system. A research also shows that drinking cold beverages will decrease the probability of becoming angry (source).

A new business idea for areas suffering from global warming (which by the way means everywhere on the planet) is to establish pop-up cooling rooms, places where temperature is substantially low and where people can spend a short time to cool down. This can be easily implemented with refrigerated shipping containers whose temperature can decrease drastically (on extreme even below zero). In order to decrease crime rates and increase public safety we really need to keep even the common people cool and prevent their blood from boiling.

Shanghai Metal Corporation is a major supplier of high quality refrigerated containers that are equipped with fresh air conditioning system and have a low Co2 footprint. More details about our reefer containers can be found in our website (www.smccontainer.com). Please also follow us on Twitter, Facebook, LinkedIn and Instagram. Try also our mobile application by scanning the QR code below. The Eiffel Tower, Louvre, Notre Dame, Versailles, Moulin Rouge, those are the places to visit in Paris. In 2009, the city of love also became famous of a creative marketing campaign.

The Korean electronics company LG set up a creative marketing campaign for their ecological fridge. The company, one of South Korea’s largest chaebols, turned a 70 meter container ship into the world’s biggest fridge that sailed up the Seine from Le Havre to Paris between June 22 and June 25. The vessel transported cooking ingredients that the famous 3-star Michelin chef Alain Passard cooked for visiting journalists.

LG’s ecological fridge uses a patented “Linear Compressor” technology that is to lower energy consumption up to 20 percent compared to other conventional fridges. The new fridge technology has also received an A+ rating from the EU.

As businesses are getting more aware of the benefits of refrigerated containers, new uses for them are emerging. Reefer containers are basically tools that combine mobility and cold chain. One can set up a temperature sensitive business and still vary its location. For example, Atlanta’s Botanical Garden used a refrigerated container to set up a mobile bio-secure research laboratory for their research  on frogs in 2011. Reefer containers are also convenient in, say, open-air events where organizers need to keep their heavy loads of Red Bulls and Coca-Colas chilled all the time.