People love eating hamburgers and drinking some Coke from a soda can. The idea of getting some juicy burger in exchange of soda cans sounds awesome and not impossible! Goodbye grandma’s cuisine.

DDB Stockholm and McDonald’s cooperated on a campaign in Stockholm in Sweden in order to make young people clean beer and soda cans after city’s endless festivals. To make this campaign more efficient, McDonald’s has installed unique advertisements.

The ads doesn’t contain just a poster, it also conceal plastic bag dispensers for collecting cans. Only thing you have to do is just tug on the poster’s bottom and a bag is yours, ready to go. Each of these bags explains the pricing for the promotion. For 10 cans you can get either hamburger or cheeseburger, for 40 cans you can get Bic Mac. The billboards are installed mostly near parks, summer festival areas. 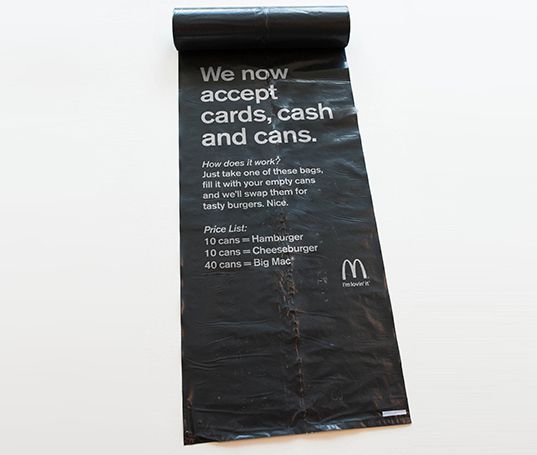 McDonald’s think that folks going to music festivals, would spend most of money with their friends on festival tickets, shirts and drinks. After the whole day at festival, dancing, screaming, singing they are most likely going to be hungry. “So, accepting cans in return for burgers gets them to McDonald’s and the cans to the recycling depot. Everyone’s happy.” Simon Higby, a DDB Stockholm creative says.

It could be a great way of cleaning up the neighborhoods  and the communities with lower income could live better. But then young people have to jump and move a lot at festivals to get rid off “hamburger kilos”.

We like hamburgers and can of Coke in Shanghai Metal Corporation but what is more important, we offer high/quality aluminium which is widely used in a food industry and cans are made of it. For more information visit our website or send us inquiry. English speaking staff will guide you further. Download a new application by scanning QR code below.

You can read more articles written by this author here.