Ai Weiwei, a Chinese contemporary artist, born in Beijing, China is active in sculpture, installation, architecture, photography, film but also in social, political and cultural criticism. He collaborated with Swiss architects Herzog & de Meuron as the artistic consultant on the Beijing National Stadium for the 2008 Olympics.

Ai Weiwei created a massive metal bird wing. He wanted to represent freedom but the installation is immobilized like a trapped animal inside one of America’s most notorious prisons – Alcatraz. It can be only seen from above. Visitors are placed as an authority but they still don’t have full access to the installation.

It weights more than five tons and the whole sculpture is earthbound. The wings are made from reflective solar cookers and kettles used in Tibet. His artwork is kind of a word play, merging together the material quality – metal and concept of freedom.

Cycling is one of the most common forms of transportation in China. However, Ai Weiwei removed their primary function and made the static. There isn’t anymore freedom associated with cycling and bicycles are piled together forming a labyrinth that keeps them immobile and useless. The visitor can stand below the installation and observe details from new angle and gain a new perspective on the bicycles.

In Shanghai Metal Corporation we follow the new trends and offers our customers high quality metal and steel products. For more details please visit our website our send us inquiry.  Our English speaking staff will be more than glad to help you. You could also follow us on Facebook, Twitter, Instagram or LindkedIn. If you have a smart phone or tablet, download our new application by scanning QR code below.

You can find more articles by this author here. Who To Blame (Or Thank) For Your Braces

How To Do A Better Job Than Jack If you ever traveled to the astounding New York City before you most likely went to see the Statue of Liberty from very close. If not face-to-face you might have seen it on TV or stamped on a travel magazine, andvery often Hollywood movies play a scene or two, romantic or not. From far or close everyone could recognize it, the symbol of freedom and democracy in the heart of NYC.

The Statue of Liberty was a special gift from France to the USA as a representation of friendship during the Revolutionary War. It arrived in New York Harbor on June 19, 1885. The statue came in 350 pieces and was assembled once got in America. The Statue of Liberty Represents the Roman goddess of freedom, Libertas, holding a torch in one hand and a tablet with the date of the Declaration of Independence in the other.

Built in France, the statue is made of hundreds of thin copper sheets assembled on a frame of steel support. The thickness of the copper outer layer is only 3/32 of an inch – the thickness of two pennies put together. Despite how thin it is, the copper is strong. The amount of copper in the Statue of Liberty could make 30 million pennies! The statue’s original color was dull brown, reflecting the natural color of its copper plates. However, due to a natural weathering process, oxidation, air and water reacted with the copper plates, turning it slowly to the green color you see today. Although some people thought this process meant it was rotting, the weathering of the copper created a thin layer of copper carbonate, called a patina, which actually protects the copper underneath from further corrosion. 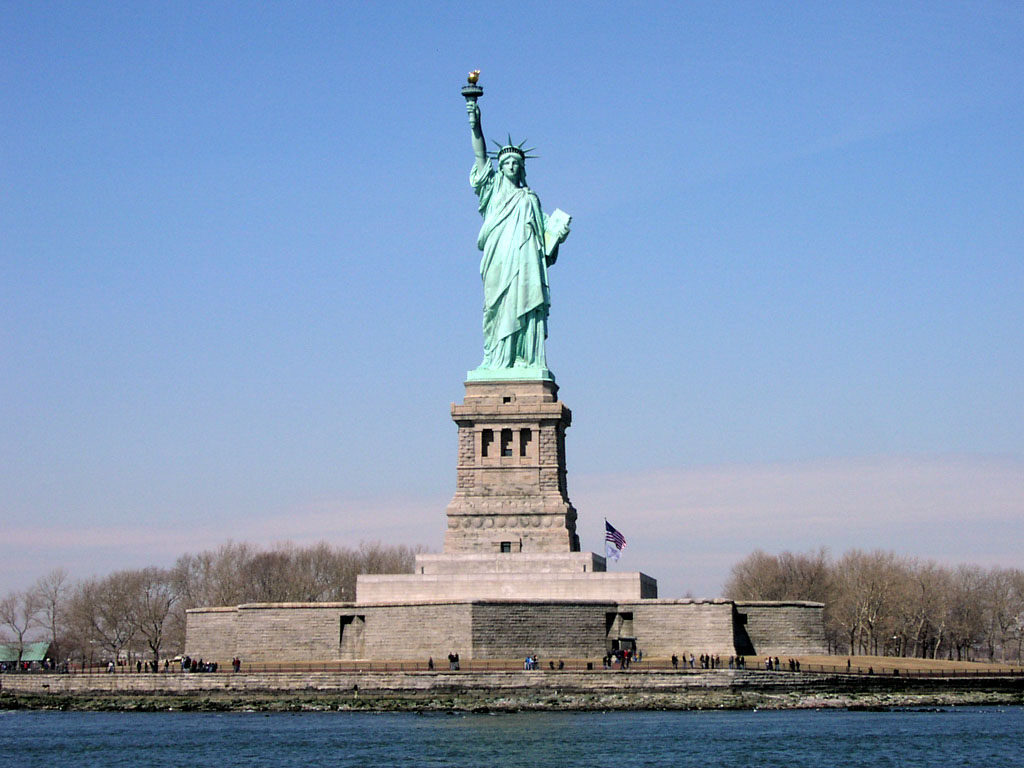