Aluminium foil is recyclable, shiny, cheap and versatile, so you can use it for lots of things. You maybe know about some tricks but I will tell you about the most interesting and surprising tips and tricks.

Soften brown sugar – sometimes it is not very easy to work with brown sugar. But it can be solved with aluminium foil! Wrap brown sugar into a foil, put it into oven to 300 degrees and after 5 minutes your sugar will be nicely soft.

Campsite cooking utensils – next time you go camping, you don’t need to take all of your kitchen utensils with you. All you must have for creating your own fashionable utensils is aluminium foil. For example you can make a frying pan using a forked stick with aluminium foil stretched over the crook or fold a spoon, fork, bowl, plate. Or use it as socks during the cold weather camping. 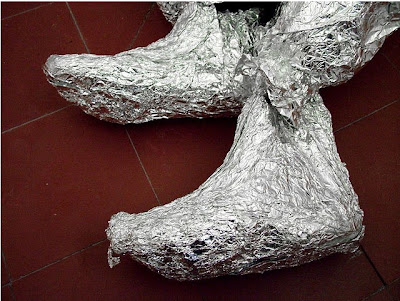 Speed up ironing your clothes – put some foil under ironing board’s cover and iron clothes on top of it. As the foil retains heat it will basically iron both sides at the same time.

Extend the life of soap – store your soap on aluminium foil to prevent it from water, so that it lasts longer.

And the best one at the end!

Protect your brain waves from eavesdropping and mind control

If you are scared that somebody (government or super-advanced alien races) could read and control your mind. To fight against telepathic control techniques you can fashion aluminium foil protective helmet. Berkeley engineers tested wave-blocking power of aluminium foil. Y can decide whether you believe it or not 🙂

Shanghai Metal Corporation offers customers aluminium foil, other aluminium and metal products. For more information don’t hesitate and please visit our main website or send us inquiry. English speaking staff will guide you further. Download an application by scanning QR code below or follow us on Social Media.

Movies are there to entertain, so its understandable they don’t waste time on specifics and science. However, some movies invest so much time in developing a scifi premise or a character’s vast expertise in bomb making that it’s slightly insulting when they present us with something so amateur. (See our past article ‘are locks as easy to pick as in the movies?’ for more on movie realism.)

This is older than television; if you look at animated cartoons from the early to mid 20th Century, one of the more common mayhem-related props is a bomb—black, bowling-ball-sized, with burning fuse stuck in the top, and possibly the word BOMB on it in big happy white letters.

On TV they always have blinking lights (red is a popular color), audible beepers and/or a timer counting down on them. Some bombs have all three. Older depictions have a loudly ticking alarm clock taped to a bundle of dynamite.

In reality, modern bombs that aren’t sanctioned by government are generally made not to be identified so wont tick, beep or otherwise indicate its true form. Military and construction bombs however are labeled to the extreme. Construction is due to health and safety, and military because as the majority are designed to explode on impact, labeling won’t affect their efficacy.

So to answer the question, no, bombs do not tick.

Shanghai metal manufactures the carbon steel strip for clockwork feeds which do indeed tick. As an ISO 14001 (International Quality Management System) Company and recipient of the “Star Enterprise Award,” Shanghai Metal Corporation prides itself on exceeding international standards of quality and reliability. We guarantee the best prices, quality support, and fast delivery. To find out more, please visit our Website or send your inquiry here. Follow us on  LinkedIn, Twitter, Facebook, Instagram and don’t forget to subscribe to our YouTube channel. Or you could try our new mobile app by scanning our QR code.

When amateur ‘land fishers’ (or metal detector users) make an archaeological discovery, who receives the proceeds? Should academics get automatic claim upon the find, the owner of the land, or should we follow the childish yet simple rule of finders keepers?

Economists have long claimed that property rights have incentivized innovation and discovery, so to motivate future finds the finders keepers rule should be maintained. However this infringes on the land owners and the much older monarchist rules where from example in ancient Rome, half went to the finder, half to Hadrian. So what have other countries decided?

In the UK, to encourage artifacts to be enjoyed by the public, the Treasure Act of 1996 stipulates if something of worth is discovered, museums or the government will bid or offer the fair market price for them. For example $5.3 million was paid by the successful bid from a British Museum, and split between Herbert and the owner of the Staffordshire field where the Anglo Saxon copper was found.

However in the US, various statues and precedents make the rules murky. For example, US treasure seekers in 1993 discovered the wreckage of a steamer containing millions of dollars worth of gold coins, but had to fight a court battle with both the government and the original insurers of the accident. They eventually won back most of the value, but these decisions are made by case by case and are very much subject to opinion,  and muddled by the American culture personified by the ‘no trespasser’ signs.

So which system should prevail? Ultimately, 90% of finds are by amateurs, so without incentivizing them, future discoveries will never see the light of day and be enjoyed for its academic value. But unfortunately as there is a lot of money involved it will inherently be plagued with conflict.

So like the recent Roman copper coin find in the UK, the value of copper can be quite pricey. At Shanghai Metal, we manufacture competitively priced value added copper products. As an ISO 14001 (International Quality Management System) Company and recipient of the “Star Enterprise Award,” Shanghai Metal Corporation prides itself on exceeding international standards of quality and reliability. We guarantee the best prices, quality support, and fast delivery. To find out more, please visit our Website or send your inquiry here. Follow us on  LinkedIn, Twitter, Facebook, Instagram and don’t forget to subscribe to our YouTube channel. Or you could try our new mobile app by scanning our QR code.

Today shipping containers are used to build apartments, hotels, stores and saunas to name but a few. But why does it make sense to build schools out of containers?

The first reason is that especially old wooden school buildings are likely to have mold issues that may cause severe health risks. For example an article of a Finnish science magazine Tiede states that every second school in Finland has mold issues (source). Students are therefore either forced to stay in their mold school or move to another school. Container schools could be installed in relatively short time and with relatively low costs.

The second reason can be studied from Samsung. In 2012, the South Korean electronics chaebol established a shipping container school in the South African village of Phomolong as a part of its corporate-social responsibility program. The school offers its 21 students premium education facilities with solar powered electricity system and notebooks, an Internet connection and Samsung Galaxy tablets. (source)

In Orange County California, creative architects had an over three months projects of expanding the Waldorf School in Costa Mesa by using shipping containers. It took 99 days to build four buildings out of 32 shipping containers. The eco-friendly construction project cost two million US dollars which was estimated of being 10-20 percent cheaper than an “old-school” building project. Also it would have most likely taken more time than 99 days to finish by using other material than shipping containers.

There are many types of internationally standardized shipping containers. Some have an open top and some can be opened from the sides. Thereby it gives designers limitless opportunities to develop mobile education facilities. In order to solve mold related problems or take education to less developed areas, governments, nonprofit organizations and companies’ CSR managers should look for containerized education solutions.

Shanghai Metal Corporation is a proud provider of shipping containers. Our wide variety of container products can be seen in our website http://www.smccontainer.com. We hope that you also follow us on Facebook, Twitter, Instagram and LinkedIn. You can also try our new mobile application by scanning the QR code below.